Information On Cell Tower Leasing And Development From Industry Experts

A common question we get at Steel in the Air: Do wireless carriers prefer to collocate their cell sites on towers, to install the cell sites on rooftops, or to use existing structures like water towers? One of our municipal clients asked the same question and to help them, we put together the chart below. The chart BELOW illustrates the pros and cons of different types of structures that might be used by a wireless carrier. Tenant improvements are defined as structures that were not originally designed for communication antenna installation but are adapted for such a purpose. They include billboards, water towers, signs, and light poles. The chart uses a grading scale of 1 to 3, with 1 being the least favorable to the carrier and 3 being the most favorable.

Here is a summary of the site characteristics: 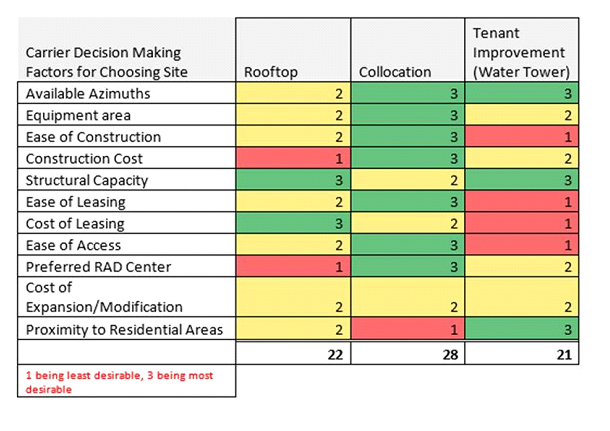 In reviewing the final “tally”, collocation on towers is the preferred option for wireless carriers in most situations. Only if there isn’t a tower available will the carrier start to seek other options like rooftops or tenant improvements on non-tower structures. Installation on rooftops and installation on non-tower structures are fairly similar in terms of preference to the wireless carrier. However, as mentioned above, there may not be any other options especially in residential areas or dense urban areas in which case the wireless carriers will seek to use rooftops or tenant improvements.

As to whether the carrier will choose a rooftop or a tenant improvement often comes down to who owns the structure or building. In general wireless carriers prefer to lease from small private property owners and building owners. The lease process typically takes less time and private landowner or structure owners are unlikely to know the fair market value of their site or have a good attorney who will add the appropriate protections to the lease.